Once upon a time there was group of 17 goddesses. Curious and nervous, the girls and their suitcases traveled to Schiphol airport. All had one question in mind ‘where was this trip going to bring them?’ It all became clear during a speech in where the destination was announced; Marseille!

After a two hours flight, the girls landed in the beautiful and sunny city, where a woman and her son were waiting for them. With a few cars and a lot of bumps on the road, the girls were driven through the astonishing environment of France. At a certain point they reached a typical France house in the middle of some fields. There was a big tree in the middle of the garden with lights in it. a big stone barbecue in a corner and there was a private pool in the garden. A big apartment that would fit 17 girls completed this picture. The party area, which was placed next to the apartment made the whole thing even better! The girls sighed, everyone was excited to spent the next couple of days together at this wonderful property.

The first night, after all the girls were unpacked, they immediately went to the pool. The afternoon was filled with some laughs, some dips in the water, some drinks, beautiful weather and the best company you could wish for. When the girls were starting to get wrinkled fingers and the pool was cleaned by their very own pool girl Louise, they went back to the apartment and started preparing dinner. After dinner, more wine came to the table and more stories were being told. After some good conversations, the girls called it a night.

The second day, while the most girls were just opening their eyes, the breakfast team had prepared breakfast to start the day with enough energy. When everyone was enjoying the ray of sunshine and they were all set ready to go, the girls went to a wine shop and a market in a small village nearby. At the market, the girls got an assignment. In small groups, they received an amount of money, to go with a course for dinner. With only one hour on the clock to shop ingredients from the local market the girls ran off to the market.

Back at the property, the girls went preparing their courses, two starters, two side dishes, two mains and two desserts. After every kind of course the girls had to vote their favourite. The culinary, very filling dinner took around 4 hours. But the evening wasn’t over yet. After dinner, the girls went changing outfits for the NYX letter party, a party where they had to choose a letter from NYX and make an outfit of it. Outfits varied from Navigation systems to Yoga teachers and it wasn’t quiet until early in the morning..

The third day during breakfast not many girls were fit due to several severe hangovers.. however, the girls, as ready as they could be left the cottage to go on a field trip to a Marseille. Once arrived, the first thing they saw was the beautiful new harbour, after that, the girls split up. Some girls went for a ride in the Ferris wheel, some girls went shopping, some girls went for a train tour, others decided not to move and enjoy a drink. But after a whole afternoon, they sure all knew what they thought about Marseille. What a beautiful city. All together again, the girls went for a long walk, looking for the restaurant they planned to eat at.  When they finally arrived, the girls laughed a bit, was it really a karaoke bar where they were going to have dinner? It can be said the expectations weren’t very high, but how wrong could they be? The food was amazing and the atmosphere was fantastic. A great atmosphere to start the night in Aix, where the girls went for a little dance.

The fourth day after not a lot of sleep, the girls went up for breakfast again. Whilst grabbing the croissants, they were told what the planning of the day was going to be. What’s a trip to France without a little wine tasting? Once arrived at Chateau Vignelaure, the girls had a tour through the company. Afterwards, of course, the tasting began. Several great wines were tasted accompanied by great bites. At the end of the day, the girls gained knowledge of wines and returned with many bottles for them to enjoy back home. Back at the apartment, the girls went to the pool again. Last time to relax together. The dinner team was already preparing dinner while a couple of girls already went packing. This was the last evening together and they sure wanted to make the best out of it. All dressed in some comfy clothing, the girls enjoyed a barbecue together. Lots of salads, grilled meat and of course, lots of good conversations and laughs. Some girls who didn’t want the weekend to be over yet, sat in the garden to drink their last wine together in France, while others went to sleep. At 4.00 AM it was time to leave the property. The girls had not been this quiet before, all tired and ready to go home, the girls went to Marseille airport. The wacky lovely owner of the apartment waved the girls goodbye, she sure needed a vacation after spending a week with 17 sorority girls! As all good things, the trip came to an end – but it sure was a trip to remember! You can find the pictures here!

These girls are not just girls, they are a family.

“Let’s count the stars together…” 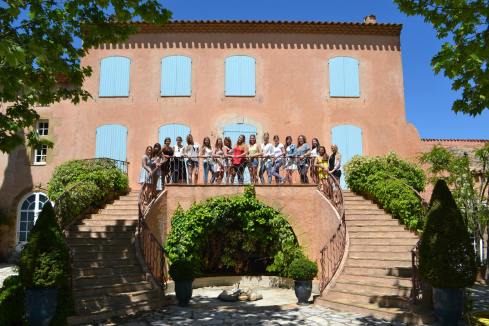 The photos of our sweet evening in the candy shop are now online! 🍭 Go check them on our FB page. 📸
Shotnight: Candy Shop Edition! See you all next Wednesday @studiodependance 💚
Last Wednesday we had a drink with @jc.escalatie, thank you for the great evening! We had a blast 💙💚
%d bloggers like this: